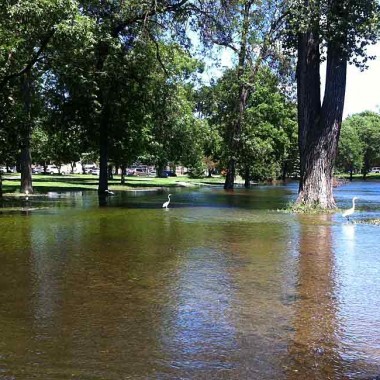 Much of the parkway along Minnehaha Creek and near Lake Nokomis flooded in June.

Am I ever glad to see the end of this Mercury Retrograde. This one has been a real challenge. The big storms we had yesterday almost felt like the grand finale and now we get to move on. Merc doesn’t actually go forward till Tuesday/Wednesday, but there’s a much easier feeling out there in the Universe this morning. July actually feels like things are calming down emotionally. Unfortunately the weather isn’t going to calm down much. It feels crazy and disruptive in the middle of the month, so be sure to check in with your inner voice when making plans for that time.

I’ve got a new psychic development class starting Tuesday night and there’s an interesting feeling with this group of people that are coming together to learn. Each class I teach always has it’s own vibe. Usually the ones that stay for the entire 16 weeks are people that have been together in previous lives and this upcoming class definitely has that feeling of all being together before. The classes are usually much bigger. Anywhere from 45-60 at a time and this one only has twenty but it feels like an important twenty so I’m anxious to see what’s up with this group.

I had an interview this past week with the VP of a production company in New York  that went very well. No contracts have been signed so I can’t talk about any of it, but it’s a show I’d love to do. I’ve been waiting to hear about another tv show for months and my inner voice has continually said July so I’ve thought all along it was that show, but now I’m wondering if it isn’t this new show that’s going to happen. When I know something I’ll let you know.

A week ago right now we “adopted” a cat named Bella. I’ve posted her on FB a couple of times. Just a beautiful cat but it didn’t work out. She missed her mama too much and fortunately she was able to take her back. We’ve all been shaking our heads this week wondering what that experience was about. Jay and I are thinking if we pursue this again, we want to get two cats so they can play with each other. It was really nice having a cat around again.

I guess that’s about it for this week. Just felt the need to connect with all of you now that communication is getting back to normal. I’m going to go out in the garden and get some very late planting done. It looks like a beautiful day.

For those of you who’ve been waiting for me to teach The Life and Teachings of the Masters of the Far East, my husband Jay is going to teach it instead. My schedule is just too jammed up and he loves the book. The new class is going to start Wed. July 16th from 7-9:00pm at The Center. If you’re interested in attending, send him an email to register: Jay Coleman <jc030847@gmail.com>. We’ll also send out another announcement about this. He was going to start it in August, but it feels important to start it in July, so that’s what he’s going to do!

Nancy Jernander will be back at the Center Friday, July 11th at 7:00pm to give us an astrological update so mark your calendars.

I hope you’re having a beautiful day.