Many years ago I was renting a house right in the heart of city, half a mile from one of our lakes. It was a normal day. Nothing seemed different except that there was an energy in the air. An odd, nameless sort of energy.

I had a strong desire to go visit my mom so I made plans with a friend to go see her together. About half an hour before we left, I started to get a really strong desire in my whole body to go visit sooner than planned. I started to feel a slight whirling energy in my body which I couldn’t identify. I thought maybe I had drank too much caffeine. That seemed to be the only explanation for this “gotta move, gotta get out of here” kind of energy.

As soon as my girlfriend arrived, I told her we needed to go right away. I wondered if maybe my mom was sick and that was the reason for a prompt departure. I wasn’t sure. I just knew everything in my body was telling me to leave.

When we went outside, I had the strongest knowing that my girlfriend should move her car even though it made no sense. There were no weather warnings out. Everything seemed unusually calm in the atmosphere and yet, it felt like beyond our atmosphere, there was something cooking.

My friend moved her car and we headed over to mom’s. The further away from my house I drove, the calmer I felt, although it didn’t last very long. My inner voice kept saying “just keep going.”

When we got to my mom’s, the whirling sensation in my body got even stronger. I felt like a caged lion. I wanted to get away from the energy but I didn’t know how. 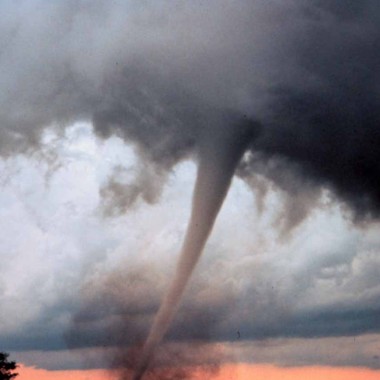 Shortly after arriving, the siren’s came on which we all knew meant tornado warnings.

My mind reassured me that tornadoes never go into the city, or at least that’s what my dad told me when I was little so I figured it was just another warning that would turn out to be nothing.

The whirling in my body got so strong, I started pacing back and forth. We turned on the radio (this was before the weather channel existed) and it said that a tornado had touched down at Lake Harriet, the lake I lived less than a mile from.

My body started to calm down and I started to feel somewhat normal but I had a knowing that something bad had happened. I called my landlady and she told me not to come home. That the tornado had brushed by the house and the neighborhood was a mess.

We waited for about an hour, but I had to go home and see what damage had been done. My girlfriend was also quite concerned about her car. There were police cars all over the place and they would only let me into the area if I showed I.D. that I lived there.

We came around the corner and there in the one and only spot on the street where there wasn’t a downed tree sat my friends car, totally un-harmed.

I’m sharing this with you today because it was my intuition that totally guided me through that experience and kept me safe.

Last week when that tornado hit N.E. Mpls, I had that same knowingness inside all day even though there were several periods throughout the day when the sun was shining and by all appearances, things seemed fine.

I listened to my inner voice all day for any indication that I or my house was in danger and I never got the message to leave or head for the basement. Not even when the sirens came on.

I did a reading for someone this week whose 8 yr. old daughter is suffering from anxiety right now and when I asked the guides if they could shed light on it, they said that she was fearful of tornadoes because of everything she’s been seeing on the news and that her mom needed to teach her to listen to that still small voice within to know when she’s in danger.

And that’s what brings me to the point of all of this. WE ARE GIVEN what we need. We get the messages internally to get out of harms way, and we need to LISTEN, AND TRUST IT TO DO WHAT WE FEEL GUIDED TO DO.

Back in March when I was thinking about the weather this spring and summer, I saw major tornadoes ripping their way through places they hadn’t been before and it feels like it’s only just begun. About an hour ago, I turned on the weather channel to see what’s predicted for today and they said from Minnesota down to Nebraska and all the area’s going East, there is something called a Tornado Cluster that may be happening today and especially tomorrow.

Life is full of surprises lately and they seem to coming at us fast and furious.

Please get in the habit of checking in with your intuition on a daily basis and asking it for guidance throughout the day.

And one more helpful piece here is that intuition does not have emotion. If you are feeling fearful, that is NOT intuition. It is fear.

Ask the Universe to help you release that fear so that you can hear what the still small voice is saying.

I hope you have a safe and fun memorial day week end.

I’m heading to the garden store.

Are you using your intuition?